LA PINE, OR -- The Oregon Department of Transportation is working to develop the next steps for the Highway 97 overcrossing at Wickiup Junction. ODOT Engineer Della Mosier says the project stalled in May after tests showed the land under the ramps leading to the new bridge was settling. Although, she admits some movement is expected, "In this case, what we saw was that between March and May the settlement not only wasn’t slowing down, it appeared to be speeding up, which was a red flag for us." 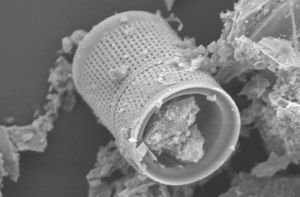 Testing by geotechnical experts determined the structure was being built over an ancient lake. Darren Beckstrand, Geologist with Cornforth Consultants, says they found a unique combination of ash, pumice, silt and the skeletons of microscopic organisms known as diatoms (right). Under the weight of the project, he says the material is reorienting, causing unpredictable shifting of the soil. "There’s not a lot of information on it; there’s not a lot of large construction on these types of materials in the U.S."
ODOT Director Matthew Garrett says the agency couldn’t have known in advance because standard geotechnical analysis conducted prior to the start of such a project does not include the use of a scanning electron microscope and x-ray diffraction that discovered the problem. "I think we need to continue to ask ourselves, ‘what else could we have done, if anything?’ Things happen. I want to make sure, given a situation like that, that we know what we need to do so we don’t have another experience like we’re seeing out at Wickiup, here."
Click HERE to view ODOT's latest YouTube video on the project.
The agency has spent $13 million on the project, so far. ODOT plans to ask the state Transportation Commission to approve the complete removal of the overcrossing and look at another way to take Highway 97 traffic over the railroad tracks, north of La Pine.
Read All