REDMOND, OR -- Cascades East Transit is making progress on its new Redmond Transit Hub. Senior Transit Planner Jackson Lester says there were delays that pushed some of the work into winter, but mild weather has allowed construction to continue, a few months behind schedule. "Initially we were intending to complete the project in 2017. Thankfully, we were able to get extensions on our timeline with our grants to be able to bring it into the spring of 2018. We anticipate there will be a 'soft opening' of the site sometime in March."

The new facility is being built near the Redmond Grange and Lowe's, just off Highway 97, which Lester says is more convenient than the current station. Right now, transfers are made at the Redmond Library, downtown, "That means that if you’re going from Madras to Bend, or Prineville to Bend, or Prineville to Madras, you’re connecting buses through Redmond and so, on both ends of that trip you’re having to do that inefficient little detour." Lester tells KBND News the new hub will be more convenient for everyone, "That will give us more flexibility on both ends of all of our community connector routes." There is no fixed-route bus system in Redmond.
CET designed the new transit center with amenities said to be more user-friendly, especially for those with disabilities. Lester says even how the buses park will change, thanks to a "saw-tooth" feature, "There are jogs in and out of the curbs so the buses can come and go independently. Whereas, if you have a flat curb, like at the library, the buses have to stage in the order that they arrive." He says that will make it easier for visually impaired riders to find their bus, because it will park in the same spot every time. 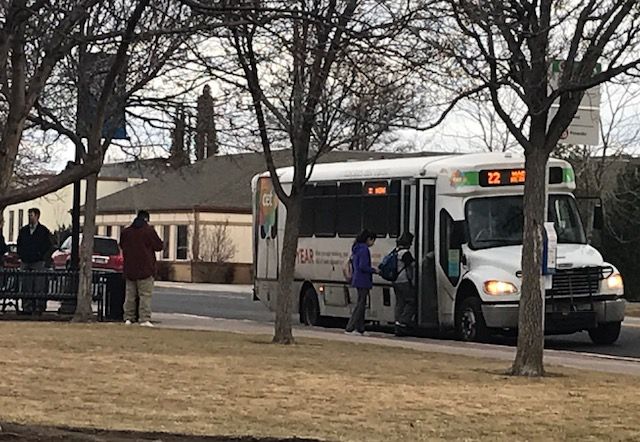 The entire project is expected to cost nearly $1.6 million, the majority of which is covered by grants. Lester expects buses will shift to the new hub in late March, with all amenities installed in time for an April Grand Opening celebration.
Riders board a CET bus at the Redmond Library, January 23, 2018.
Read All