BEND, OR -- Bend city officials are celebrating the completion of the Southeast Interceptor project, also known as the 27th Street Sewer Line. Project Manager Eric Forster says the final piece of pipe went in the ground Wednesday. "It’s actually a pretty big step for us." The 30-inch gravity sewer line conveys wastewater to the water reclamation facility northeast of Bend. 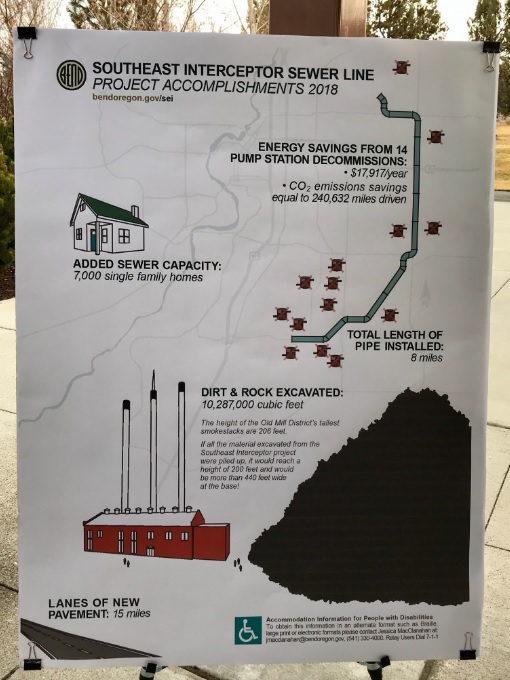 The project expands sewer capacity in several parts of the city, meaning more people will be able to connect to the system. "It allows us to decommission some pump stations but, an important part of that is, they were pumping to the Central Interceptor and now we’re shifting those flows to the eastside." In fact, with the new gravity sewer line, the city plans to decommission 24 energy-consuming sewer pump stations. Forster tells KBND News, "It opens up capacity in the central part of town for development. Also, being that this new pipe is of larger diameter, we’re able to open up development more so on the southeast and eastern side of town." He adds, "At the south end of town, there were a couple of spots where we were pretty much at capacity, so now we’re going to be able to open that back up. In addition to that, there are large areas where homes are on septic that now can be served by gravity sewer."

According to Forster, the total project - stretching from the Murphy/Parrell Road area to Moody Park - cost about $70 million, "It’s completing work that started in 2010. It was shelved for a couple years but then they picked it up again in 2014 and finished out the construction, as far as the pipe installation." That two-year pause in the project in 2012 was to allow for a re-analysis. After the project was deemed the most cost-effective fix to the city’s sewer capacity problem, work restarted in 2014, with Forster promising it would be up and running by January 2018. It became operational January 31. "We still have to finish up the road work; there’s going to be some paving and sidewalk and curb work that still needs to happen. But, that work on Neff, we’re hoping to get that buttoned up here, in the next month or so."