PORTLAND, OR -- As of early April, more than a third of Oregon voters were registered as Nonaffiliated. With the voter registration deadline now passed, Nonaffiliated voters will be left out of partisan decisions in the May Primary. Oregon Secretary of State Shemia Fagan says they will still get a ballot, "There are a lot of nonpartisan races on the ballot this May. But we like to emphasize that so people are not confused when they receive their ballots and maybe it looks different than their spouse’s ballot or somebody living with them in their house. That they may be because they’re registered to different political parties or not registered to any political party at all." 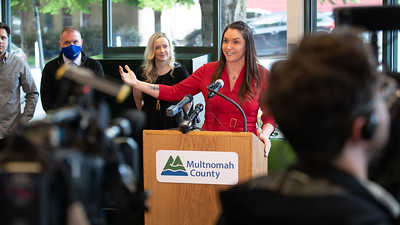 Fagan acknowledges not everyone wants to be registered as a Democrat or Republican, "They only have to be registered to a party for 21 days before the election. After the election, they can go right back on Oregonvotes.gov and change back to being a Nonaffiliated voter or whatever their preference is." Democrat and Republican parties in Oregon have closed primaries, and Fagan says only the parties can change that system, "What we can do at the Secretary of State’s office is to make sure that it’s as accessible and easy as possible for people to change."

Ballots are mailed to voters Wednesday. They must be dropped at an official drop site by 8 p.m. on May 17, or postmarked by that day and received by the county within seven days of Election Day.

Photo: Secretary of State Shemia Fagan talks to reporters during a visit to the Multnomah County Clerk's Office, April 26, 2022.